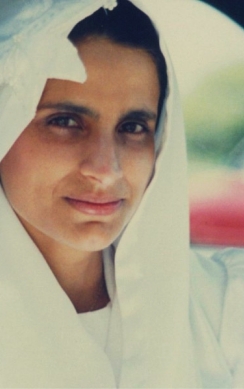 Shamima Shaikh’s name may be unfamiliar for you and many who are not deeply informed about Islam and gender issues in South Africa or who tend to identify Muslim women and/or activism for women’s rights in Islam with the Arab region. Why should you know about her? Because Shamima Shaikh was one of the most notable Muslim anti-apartheid activists and advocates for the rights of Muslim women in her country—a prominent feminist, journalist, radio producer, movement builder, trailblazer, and fearless activist.

This year—2017—marks the 20th anniversary of her death, and I think it’s a special occasion to recall her brave legacy, not only because twenty is a special number. In the context of violence against women in South Africa and worldwide—in particular the violence against and exclusion of Muslim women in Syria, Palestine, Yemen, and Saudi Arabia—as well as the gendered Islamophobia that targets our sisters in Europe, claiming the courage and spirit of resistance of Shamima Shaikh as part of our ethos as women living in a patriarchal world that hates us is absolutely necessary.

Shamima Shaikh was an activist who made her way from and towards the grass roots; apartheid, poverty, inequality, and discrimination against women were some of the issues that mattered to her. During the difficult years of racial segregation in South Africa, she got involved in the Azanian People’s Organization (AZAPO), denouncing racism and oppression in university environments. According to her husband, Na’een Jeenah:

Shamima’s mission in life was to struggle for justice; whether against white racists propping up apartheid or Muslim misogynists who wanted to keep women in their place.

Shamima took her activism to the heart of the Islamic community. Courageously advocating for the right of Muslim women to have a voice and to participate on equal terms with men in community life, she became the first National Coordinator of the Muslim Youth Movement (MYM) Gender Desk, where she organised workshops, seminars, and campaigns. She was a pioneer of her time in promoting inclusive mosques; she firmly advocated that our presence in these spaces was indispensable, as she said:

Mosques are the most important centres of Islam. Decisions are taken, direction is given. It is where people meet to pray together and it promotes consultation.

She did believe that Islam holds a message of equality and social justice, aimed especially at women, so the inequality that affects us through society was one of her major concerns. She even had the “audacity” to be vocal on controversial issues that are absent from the scope of Muslim feminists nowadays, albeit they are part of the painful reality of many Muslim women along the world, like criminalized abortion and the sexual exploitation of women through prostitution.

The struggle against patriarchy was parallel with the fight against cancer. In 1994, already diagnosed with the disease, she was appointed editor of the newspaper Al-Qalam, which became the communication channel of progressive Muslims in South Africa. On December 22, 1997, Shaikh completed her final public engagement with the presentation of the lecture: “Women and Islam: The Ideological Struggle”. Seventeen days later, she returned to God.

Claiming Back her Legacy for All

It is possible to find online some magazine articles written during the last decade that refer to different aspects of Shamima Shaikh‘s life. Since 2014, memorial lectures have been held in different cities of South Africa to honor her memory: Kecia Ali, Sadiyya Shaikh, and Fatima Seedat have addressed the figure and activism of Shamima Shaikh in 2014, 2015, and 2016 respectively.

Inspired by these efforts, several months ago I proposed to feminist comrade Shehnaz Haqqani from the United States, a collaboration with me in crafting a book on Shamima Shaikh. Na’eem Jeenah, from South Africa, who was married with Shamima, joined us later.

The book we are working on, which will be launched this year, is an anthology of essays to mark the 20th anniversary of her passing. It will celebrate her legacy, life, and courage and highlight the struggles and issues that she believed were important for leading humankind towards more inclusive and compassionate societies. Contributors from South Africa and all over the world include those who shared their life with Shamima, activists inspired by her struggles, and scholars interested in highlighting the central tenets of her political thinking on women’s rights and social justice.

As the coordinator of this anthology, let me say that we are humbled by our contributors’ generosity in adding their voices to this book. We are pleased with the diversity gathered around Shamima’s memory: Remarkable scholars like Margot Badran and Kecia Ali, together with Fatima Shaikh (Shamima’s sister), activist Sirin Adlbi Sibai from Syria, or an emergent voice in Islamic Feminism such as Lailatul Fitriyah from Indonesia, are some of those who have embraced our vision of this work as a primordial act of love, gratitude, and sisterhood towards her.

We are guided by the deep conviction that Shamima Shaikh was a woman whose life is a testimony for all times and for all struggles for social justice. She was anti-apartheid; she devoted a big part of her life to making sure there will be room for everyone in her society. This is an ethics worthy to learn and practice. Her legacy deserves to be known, embraced, and owned by all, beyond the limits of our religious, ethnic, and national identities. She was a Muslim, Indian, and South African feminist, but her legacy is not property of Indians South Africans Muslims  Feminists. Any claim on exclusivity in this regard dishonors the very memory of Shamima and expresses an egoism that is alien to the basic values of feminism. What a sister did, does, or will do for our liberation is an inheritance for all women.

We celebrate the interest that her life has aroused. Along with our book, there is a biography in process to be released, maybe this year too, by a South African journalist.

In celebrating and memorialising Shamima Shaikh, we also remind ourselves that the struggle for an egalitarian society has not ended, it continues, and needs each one of us to put our shoulder to the wheel of justice as it trudges along the path of history.

Her life is proof that Islam contains a message of equality for all people and is a path and a perspective useful to reclaim and restore justice wherever it is necessary. The courage of a woman who passionately and fearlessly challenged the patriarchy of her time should be known everywhere a woman rises today to claim her dignity; as long as misogyny preys upon us, we will always need examples to inspire us.

Vanessa Rivera de la Fuente works in community development, gender equality, and communication for social change. She has led initiatives for women’s empowerment in Ecuador, Peru, Argentina, Morocco, and South Africa. As a Gender Justice advocate with a broad scope of interests, she is a social and digital entrepreneur committed to the strengthening of grass roots organizations and the development of an independent pathway of thinking, research, and academic writing around Gender, Politics, and Religion. Loyal lover of books, cats and spicy chai.

by Shamima Shaikh and
Na'eem Jeenah

This email address is being protected from spambots. You need JavaScript enabled to view it.